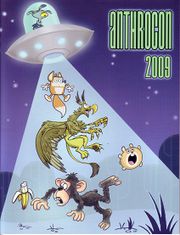 Anthrocon 2009 was the 13th annual Anthrocon furry convention. It was held on the weekend of July 2nd to 5th, 2009,[1] at the Westin Hotel and David L. Lawrence Convention Center in downtown Pittsburgh, Pennsylvania. The event's theme, titled "OMG Aliens!", focused on UFOs and other Sci Fi related topics.

Anthrocon 2009 saw a record-breaking 3,776 registered attendees, 386 more than the year before (an 11% increase). In order to keep up with the growing attendance, a number of changes were made for this year and future cons. Among them, some significant functions, including the Artists Alley and Dealers Den, were moved into Hall B of the convention center, which is twice as large as Hall C (used from 2006–2008). Registration was likewise moved from the Westin to the convention center for better crowd control.

The Omni William Penn, which traditionally had served as the secondary hotel for con goers during the past 3 years, was unavailable for Anthrocon 2009,[3] but will be back in 2010. The Doubletree Hotel, used in 2008 as the tertiary hotel, became 2009's secondary hotel, and a block of rooms was also reserved at the Courtyard by Marriott, across the street from the Convention Center. The Supersponsor lounge was not available this year due to financial issues.

The Guest of Honor was Joe Harris, creator of Underdog and the Trix Rabbit. On January 15th, 2009, Uncle Kage announced that two more guests of honor would be attending in addition to Harris[4]: Bob Boyle, Emmy Award winning creator of Wow! Wow! Wubbzy! and Disney’s Yin Yang Yo!; and Ben Balistreri, Emmy Award winning design supervisor for Foster's Home for Imaginary Friends and author of Seaweed : A Cure For Mildew.

Some attendees attended a private welcome party Wednesday night at the Animal Rescue League in nearby Verona.

Anthrocon 2009 hosted over 640 fursuiters, as counted during the Fursuit Parade.

Fursuiter Hallow Fox managed to claim the title of "First Fursuiter of 2009" when he appeared in the Westin Hotel Lobby in the afternoon, followed by fellow fursuiter Arinmal in his Cage suit.

Note: Anthrocon changed its fiscal year to end August 31 in 2009; this return reflects a whole convention's expenses, but only eight months' income. The latter half of the calendar year typically involves accumulation of revenue for the following year. Future years are likely to give a more accurate picture of gain/loss.

Source: Anthrocon, Inc. Form 990 (description from Foundation Center)
Note: These financials provide just a brief overview, and should be considered in context. Each convention has its own situation, which may change from year to year. Special events (like art shows) that are part of a charity's mission are usually run at a loss. Conventions typically have many other expenses which may come to far more than those listed. Check the source for further details.