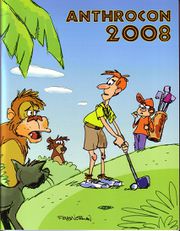 Anthrocon 2008 was the 12th annual Anthrocon furry convention. It was held on the weekend of June 26th to 29th, 2008,[1] at the Westin Hotel and David L. Lawrence Convention Center in Pittsburgh, Pennsylvania.

Convention chairman Uncle Kage announced at the closing ceremony for Anthrocon 2007 that Floyd Norman, one of The Walt Disney Company's first African-American animators and a major contributor to such movies as Sleeping Beauty, 101 Dalmatians, The Jungle Book and Robin Hood, would be the first "Guest of O.K." (He reasoned that Norman was a very modest man, and was uncomfortable at the prospect of being a "guest of honor".) 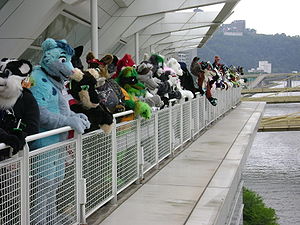 A small section of the fursuit parade at Anthrocon 2008

The Pittsburgh Pirates were in town during the convention, like last year. They were locked in interleague action, facing the New York Yankees June 24–26, and the Tampa Bay Rays June 27–29. The Yankees actually ended up staying in the Westin.

Product debuts at Anthrocon 2008 include the print version of Dog's Days of Summer, Heat #5, and animation DVD Wild for Passion.

According to a LiveJournal entry, attendance stood at 2,958 as of the opening ceremonies, raising expectations that attendance would exceed 3,000.[3] Later on, it was confirmed by Chiaroscuro during the closing ceremonies that the actual attendance rose to 3,390, making it a 19% increase from last year's, as well as a significant increase of the number of fursuiters in the fursuit parade to 453, about 13% of AC's attendance.[4]

Local classic rock radio station WDVE 102.5 did a brief featured video on furries entering Anthrocon 2008 set to the song "Eye of the Tiger". However, they were shut down by the Dorsai Irregulars and forced to cut their videotaping short.[citation needed]

The Irregulars also wrote a little song about the convention.

Source: Anthrocon, Inc. Form 990-EZ (description [for regular Form 990]) from Foundation Center
Note: These financials provide just a brief overview, and should be considered in context. Each convention has its own situation, which may change from year to year. Special events (like art shows) that are part of a charity's mission are usually run at a loss. Conventions typically have many other expenses which may come to far more than those listed. Check the source for further details.