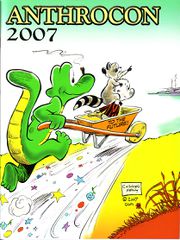 Anthrocon 2007 was the 11th annual Anthrocon furry convention. It was held on the weekend of July 5-8, 2007, at the Westin Hotel and David L. Lawrence Convention Center in Pittsburgh, Pennsylvania.

The convention hotel sold out of regular rooms as of 1 February. Alternative accommodation was provided at the Omni William Penn Hotel. As of 26 March, over 3,000 room-nights were booked between both hotels, with 750 rooms on the convention's peak night,[1] and by 16 June there were over 1,800 pre-registrations, as compared to 1,700 the year before.[2] Official attendance for the con was 2,849 people, including 202 super-sponsors. Additionally, there were 353 fursuiters in the fursuit parade. A claim was made to Guinness World Records for "Most Mascots in a parade" and is the process of being verified. The Guinness Worlds Record organization may be present next year to verify a new record. [3]

The convention's charity for the year was Animal Friends.[4] $6608 was raised through initial donations and a charity auction, with an extra $1000 added by Time Warner in October.[5]

The Pittsburgh media was generally warm in its coverage of the event. The Chicago media, however, wasn't quite as kind, as Paul Sullivan of ChicagoSports.com bemoaned the convention after the Chicago Cubs moved to a different hotel for their series in-town against the Pittsburgh Pirates because of the convention. He did not post whether the Cubs were supposed to be at the Westin Convention Center or the Omni William Penn. The Pirates took the series, 2 games to 1, no doubt with many furries in attendance.

The Pirates previously hosted the division leader Milwaukee Brewers prior to the Cubs series and the Brewers DID stay in the same hotel as the convention. During the unfortunate trip, the Brewers reported several unpleasant experiences with furries, labeling them as "creepy", including hearing loud disturbing noises including "barking" throughout the night. (It is worth noting however, that neither Anthrocon nor the Westin received any noise complaints from the Brewers) Brewers announcer Jim Powell is quoted as saying "Going up the elevator is an unpleasant experience when you are packed in with a bunch of people who look like they haven't left their mother's basements since the last convention." [6] Following the convention, the Brewers experienced a major slump, allowing the Cubs to close their lead to a few games. Bloggers would dub this the "Curse of the Furries"[7] 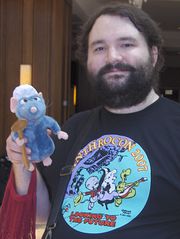 Dr. Conway is also a dead-ringer for Pittsburgh native Jeff Goldblum, except younger and shorter and in coke-bottle glasses and a white lab coat with "Mad Scientist Union Local 3.14" emblazoned on the back.

There are many people dressed as animals walking around hotel lobbies here in town, but as far as I can tell, none of them are Cubs. It was explained to me that Pittsburgh is the host city for Anthrocon 2007 ... The Brewers were staying at the same hotel as the wacky animal people this week, but the Cubs decided to change hotels when they were informed last winter about the convention. Just as well. It’s tough enough dealing with autograph-seeking fans in the lobby. No need to have to drink at the hotel bar next to a man dressed like a raccoon.

Source: Anthrocon, Inc. Form 990 (description) from Guidestar
Note: These financials provide just a brief overview, and should be considered in context. Each convention has its own situation, which may change from year to year. Special events (like art shows) that are part of a charity's mission are usually run at a loss. Conventions typically have many other expenses which may come to far more than those listed. Check the source for further details.