ANW was founded to promote charity, hospitality and creativity through art, education and building community in the Anthropomorphic Arts Fandom. ANW is known for having a strong humanities focus and being family-friendly. Since its inception, it has partnered with Sarvey Wildlife to provide educational opportunities about wildlife rescue and provide funding to support their work. As of the end of 2020 the convention has raised $16,531 in support of Sarvey Wildlife.

Some of the distinguishing features include a Thanksgiving feast, the Anthro National Film Festival, Andy's Adventureland, fine arts panels, a 24/7 art jam room, a large children's track, and a fursuit exhibition.

The first iteration was held at the Seattle Renaissance Hotel November 9-12.

The convention started with a catered opening celebration event at GameWorks Seattle. For the first time, full costumes were allowed. The attendees enjoyed playing games together and the complimentary buffet.

By the time the convention had ended, they had 162 events on their schedule, 54 vendors, 76 panelists and 58 volunteers. Attendance was 809+.

The GoH was Telephone, who chosen for extraordinary contributions to charity and anthropomorphic art.

The charity partner was Sarvey Wildlife, which specializes in large avian rehabilitation. $3.1K was raised for them.

In 2017, Lisa Ling, host of This Is Life with Lisa Ling‎ from CNN, filmed a documentary called Furry Nation, about the socially transformational aspects the fandom. The documentary was a positive portrayal of some of the social healing aspects of the fandom. The personal stories of Captain Boones, Leilia Spaniel and Ashaeda were featured in the production.

Its second iteration was held at the Seattle Renaissance Hotel on November 8 - 11.

The convention sold out and had attendance 1051+ people. The convention raised $5394.61 for their charity Sarvey Wildlife. The theme was exploration. The GoH was Leilia Spaniel.

One week after this iteration, Lisa Ling's documentary on furries was aired. 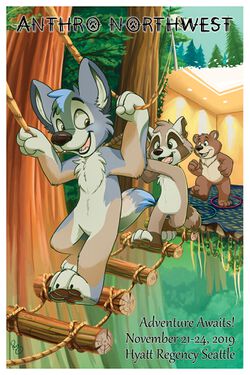 The theme was "Growth Beyond Self" and was held on November 21 – 24, 2019 at the Hyatt Regency Seattle. A Thanksgiving feast was provided to all attendees on November 23rd, which contained the typical Thanksgiving delicacies including turkey, stuffing, green bean casserole, mashed potatoes, and gravy. To make the feast possible for all attendees, the dinner was included as part of the convention registration with each attendee given a time-slot to eat at random. Attendees were then encouraged to swap time-slots with each other so that they could sit with their friends during the feast.

The GoH were Kijani and Kitwana Lion.[2]

Anthro Northwest held a virtual reality convention with a custom Pacific Northwest Themed VR-Chat world, charity auction, live-streams, and panels. Attendance was estimated to be around 1250. The theme was "Hope".

The physical iteration of ANW was cancelled due to the COVID-19 pandemic. The theme and plans have all been moved to 2021.

The 4th iteration of Anthro Northwest was held on November 18-21, 2021 at the Hyatt Regency Seattle.[citation needed]

The GoH, Matrices, who was chosen for her exceptional contributions to the fandom through continued public service, chose not to attend due to the ongoing pandemic, and will thus be GoH for Anthro Northwest 5, in January of 2023.

A video "The Dream of Anthro Northwest" was posted on YouTube on August 14, 2016 stating that the dream of ANW is built upon the best attributes of the anthropomorphic arts community. Currently, we have defined those to be: creativity, charity, beauty, and hospitality.” [4] The focus of ANW is art, education, and building community.

ANW is family-friendly event, with a maximum rating of PG.[5]