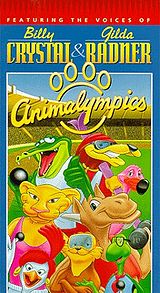 Front cover of the VHS edition

Animalympics is an animated television special that was created by Steven Lisberger (creator of the film Tron) for the 1980 Olympic Games. The show had two parts: the Winter Games, a half-hour special (22 minutes) which was aired February 1, 1980, and the Summer Games, an hour special (44 minutes) which was to be aired in the summer of 1980, but was never shown due to the US boycott of the Summer Olympic Games. The two shows were then edited together, with some filler scenes removed, into a 78 minute feature that was shown on pay TV channels and eventually released on VHS. It was released on DVD, in Germany on October 5, 2007.

Animalympics is the story of the animal version of the Olympic Games. Anthropomorphic animals of many diverse species came to compete in winter and summer game events, representing the continents of their origin. Many now-famous animators and voice talents contributed to the project. The style of the character design and art production was something short of Disney, but much better than typical Saturday Morning fare. The story revolved around the coverage of the games by the ZOO network, an obvious parody of the "close up and personal" style coverage of sporting events by TV networks. Many well-known celebrities' voices were spoofed by the voice actors, including Howard Cosell and Barbara Walters (by Billy Crystal and Gilda Radner respectively). The show was aimed at a broad audience, with much of the humor flying over the heads of kids. The soundtrack, including some original vocal numbers, was created by Graham Gouldman, of the pop group 10cc.

Michael Fremer co-wrote "Animalympics", named most of the characters and provided voices for Henry Hummel the anchor turtle among many others including both the male and female lead characters Kit Mambo and Rene Fromage. He also edited the music and supervised the mix at Todd A-O in surround sound. He was a guest of honor at a Furry convention near Irvine California a few years ago and answered audience questions. Animalympics is probably the first and only animated movie to feature a Coatimundi (Pepe Rubanosa)—a South American raccoon relative. It appeared in the film because Fremer had one as a pet for 16 years. "Animalymics" was originally created as two television specials for NBC: the 1/2 hour winter show ran during the winter Olympics in 1980 but when America boycotted the summer Olympics after the Russians invaded Afghanistan, NBC cancelled both its Olympic coverage and the hour long summer "Animalympics" However, it was always intended as an hour and a half full length feature film and was created as such when it was first produced, complete with a surround sound soundtrack that existed in the rare four track magnetic tape version married to 35mm film. It premiered in that format at the Miami Film Festival that year and was well-received. Unfortunately, that print and the original stereo and quad mixes have been lost so all existing versions regardless of format were taken from a mediocre sounding optical soundtrack, which is a real shame because the quad mix including all of the music in outstanding stereo, sounded incredible. Even the sound effects were recorded in stereo.

Animalympics was screened at the first Furry party, in 1985 (before the word Furry had come into common usage). The special version that was shown included a very rare complete copy of the Winter Games and a carefully edited version of the feature, returned to the original Summer Games format. This "special edition" [1] was created by members the C/FO animation fan club, and was screened at Science Fiction conventions and Furry parties all over the world. The show's dry humor, clever story and attractive characters made Animalympics one of the most popular "exclusive" films of Furry Fandom. At least part of its popularity among fur fen can be attributed to the sheer number of animal species found in it, many of them rarely (if ever) animated before. An otter, a Russian sable, a mink, a flamingo, an orca, hedgehogs, and squid are among the dozens of animal types in the cast. Thanks to the enthusiasm of the fans who had seen the show so many times that most could repeat the dialog entirely from memory (and often do), Animalympics has been called "The Rocky Horror of Furry Fandom".

Several characters from the movie have attracted their own followers and fans within furry fandom, especially Kit Mambo, Dean Wilson, and Kurt Wuffner. (The character design for Kit Mambo was an influence on Ken Sample's original forays into furry artwork.)

Steven Lisberger, however, has apparently disavowed his role in the creation of this film. In the director's commentary on the "special edition" DVD of Tron, Lisberger described Tron as his first animated feature film; he seemed reluctant to mention his "previous" animated feature when the subject was brought up.

It is not true that Lisberger disavowed his role creating "Animalympics" "TRON" was his first live action feature film, though it contained several minutes of computer animation. Perhaps that's what caused the confusion.

Certain parts of the film had to be censored when shown on the Disney Channel.