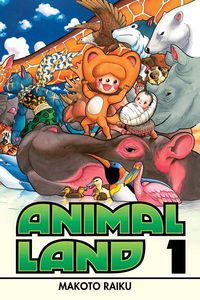 Animal Land is a manga series by artist Makoto Raiku.

Animal Land is set in a world of animals where the strong eat the weak.[1] In the first volume, Monoko the tanuki stumbles across a human baby - a strange creature which has never been seen before. Although the newborn has no claws or teeth to protect itself, it does have the rare ability of being able to speak to and understand all the different animals. Monoko and the baby must team up to protect the tanuki pack from vicious wildcats.