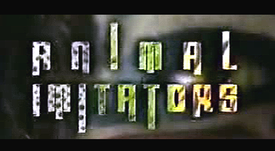 Animal Imitators is a one-hour television documentary detailing the lives of various individuals, a few of which identify themselves as members of the furry community, such as Stalking Cat.

Animal Imitators was produced by Natural History New Zealand Ltd (aka NHNZ) for TLC, and aired in August 2003.

This documentary was later abridged and recycled as an episode of Weird, True and Freaky as the episode Humanimals on Animal Planet in 2008.[1]

The program touches on various aspects related to furry, such as therianthropy and body modification.