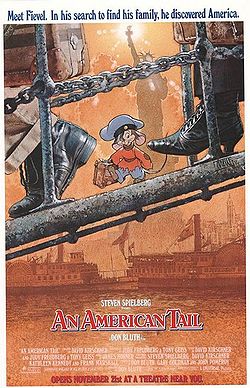 An American Tail is an animated film produced by Steven Spielberg and directed by Don Bluth, originally released in movie theaters on November 21, 1986.

The film, set in 1886, tells the tail of a poor family of Russian Jewish anthropomorphic mice who immigrate to America to find a new better life, believing the streets are lined with cheese and that there are no cats in America. Unfortunately, that dream is shattered when the family discovers there ARE cats in America and made worse when one of the mouse children Fievel is separated from his family. Fievel sets out to find his family who have begun living in a typical late 19th century immigrant manner: working in a sweatshop, living in horrible conditions, and submitting to a feline protection racket as an alternative to being eaten. Eventually, he reunited with his family in time to save the mice from the cats, led by Warren T. Rat, a cat disguised as a rat. Once Warren is defeated, the family begins to make a new and better life for themselves.

An American Tail and Maus[edit]

An American Tail is an allegory, similar to Art Spiegelman's graphic novel Maus, for the terrible conditions immigrants to the United States faced at the turn of the century. Like in Maus, the mice represent the Jewish immigrants, and the cats their anti-Semitic tormentors. The film also illustrates the hope (of a new, better life) that America represented to these immigrants at that time. Art Spiegelman publicly accused Spielberg of plagiarism due to the fact the Jews are depicted as mice in An American Tail just as in Spiegelman's earlier Maus, a metaphor Spiegelman had adopted from Nazi propaganda. Even though Maus appeared collected not sooner than in 1986 just as the film, it had been printed as a series in Raw magazine years before that.

The film was first released to VHS and Laserdisc in 1988 by Universal and MCA's home video arm, MCA Home Video (which later became MCA-Universal Home Video) with its original theatrical poster as the box cover.

During the late 1990s, Spielberg repeatedly promised that both parts of An American Tail would be available on DVD along with The Land Before Time and a complete Back to the Future trilogy box by the year 2000 as a shared set release date for all three items. It wasn't until 2002 that the first two parts of An American Tail were re-released as state-of-the-art digital telecines and with re-mastered audio on VHS and DVD, though the 2002 VHS release only carries mono audio (with considerably more hum than the 1988 release), whereas the 1988 release had had stereo, and the DVD offers both mono and full 5.1 Surround Sound.

This time, Bluth's original film from 1986 was given a new, more commercial box cover to conform with the design of the two direct-to-video sequels, losing the feel of a darker, more ambitious work that the original poster had communicated, a Bluth-typical feature due to which the film had not necessarily been as suitable for very small children as were its sequels.

The first release of the soundtrack on LP and MC by MCA from the 1980s used an alternate movie poster with all main characters framing around Fievel who is standing on a number of suitcases, and included a few additional sing-a-longs also sung by Phillip Glasser (or Fievel's particular voice actors in other-language versions of the soundtrack) but not used in the film, while the most recent release on CD uses the original movie poster and lacks the additional sing-a-longs.

In Germany, the Universal-owned label Karussell produced an audio cassette of the film released on MC in 1987, using the original German dialogue dubbing tracks, adding a narrator and some additional sounds and FX.

Probably the most well-known and most sophisticated merchandising plushie of Fievel made for Bluth's first film was made by SEARS in 1986, manufactured by Caltoy, Los Angeles. This Fievel plushie stands about 50cm (19.75in) tall, and is the only known Fievel plushie flexible enough to also sit down.

At some time, the Universal Theme Parks sold a merchandising T-shirt with a Bluth-style Fievel as their mascot next to their UNIVERSAL logo.

From 1986 through 1987, McDonald's had a special An American Tail merchandising deal with Universal and Don Bluth, mainly known for two items: An American Tail Christmas stockings, and a series of small picture books illustrated by Bluth's character designer John Pomeroy, obviously intended for reading beginner pre-schoolers and re-telling particular episodes from the movie, such as how Fievel meets Tony and they live together for a short time, although slightly deviating from the movie's canon in a number of details.

During the late-1990s, Sound Source Interactive sold An American Tail: The Animated Movie Book on CD-ROM for Windows95 and Macintosh which was basically a 2D flash-animated walkthrough through Bluth's movie, featuring QuickTime clips of the movie. In 2006, Red Ant Enterprises released a 3D game associated with Bluth's movie for the Playstation 2, which was released only in Australia, New Zealand, Ireland and UK.

In Germany, the Netherlands, and Portugal, Panini sold an American Tail sticker album with screenshots from the movie as trading stickers, re-telling the whole movie.

Beside the above-mentioned plushie, the SEARS catalogue for 1987/'88 also included An American Tail-themed bedsheets, as well as a pyjama for toddlers.

The character Fievel (also spelled Feivel correctly in the first movie's credits) Mouskewitz is the central character of the American Tail series. Named after Spielberg's grandfather, he is modeled on a curious, hyperactive and seemingly fearless boy. However, throughout most of the film, while separated from his family Fievel becomes as a very scared and lost child in a strange land.

Fievel is always drawn with an oversized red jumper and dark blue hat somewhat too big for his head (it fits at the end of the film). The hat is an heirloom of sorts, having been passed from father to son for three generations (Fievel is the fourth to wear it). Except for a brief period near the story's end, Fievel never loses the hat through all his adventures and scrapes.

Fievel later served as the mascot for Steven Spielberg's Amblimation animation studio, appearing in its production logo. Also, Fievel became the mascot for UNICEF as well. There also were two Fievel-themed attractions at Universal Studios Hollywood, An American Tail Live/Theatre (1990-1997) with a stage-show based on Bluth's first movie, and Fievel's Playland (1991-1997), based upon Spielberg's sequel. The latter was a playground area "from mouse eye's view" where everyday small human devices became large playground attractions, including a water slide. Both attractions made way for Terminator 2 3-D: Battle Across Time between 1996-1999, but as of 2008 there's still a Fievel's Playground in Universal Studios Florida and Fievel appears frequently as a costumed character on the general Universal theme park area and in parades on the Universal CityWalk (Hollywood) and the Streetmosphere (Florida).