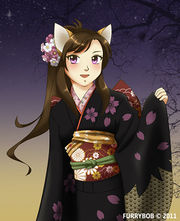 AmyFöxx, or just Föxx (born on February 3, 1978 in Bragança Paulista, São Paulo, Brazil), is a transgender, therian/otherkin, singer/composer/lyricist/musician, LGBT+ activist/progressive and "humorist" who lives in Brazil.

In the furdom she was one of the moderators of the Portuguese portal of the community site Antropomorfos.

She has appeared in several Brazilian news outlets to talk about her music and also about her LGBT+ activism.

AmyFöxx's fursona is a kemonomimi kitsune.

As a Heavy metal singer, her first solo song was Constant Fight, released in 2013, and this is her official website: https://www.foxxsalema.com.br

In 2018 she released a single called Mankind (Raw Version).

In 2021 the singles Rebel Hearts (2020), Mankind (Live Stream Concert), Emotional Rain and You're the Next.