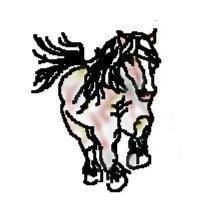 'Tivo as drawn by his player
Altivo Overo (or Tivo) is an equine character who first appeared in the spring of 2002 on Wild Spirits MUSH. The name is a fairly common Spanish name for a stallion, and translates roughly as "elevated" or "high spirited" though it may also be interpreted as "proud" or "haughty".

The character appeared first as a black and white overo paint, of Spanish Barb ancestry and therefore small in stature, and a recent runaway from some ranch near the Mexican border. He soon came to be called 'Tivo, and eventually assumed leadership of the Shadow Lands territory and a relatively small herd that was based there. He was noted for his resistance to violence and his active support for the work of healers and shamans. His history on Wild Spirits MUSH is being related in the player's blog. An image of the original Wild Spirits character by artist Jazmyn Concolor can be viewed here.

Also the personal furry of his player, Gary Lee Phillips of Union, Illinois, 'Tivo has appeared in several other settings as a bipedal or sometimes quad Clydesdale horse, chestnut colored with sabino splotches and long black mane and tail. He can be found online at FurryMUCK and Tapestries MUCK where he uses the character name "Tivo".

Under the pseudonym of Altivo Overo, he has published fiction in various furry publications and on the web.

Founder of Team AstroFurries in MilkyWay@home.