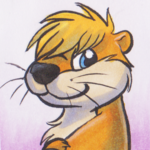 Alflor Aalto is a furry writer who lives in Connecticut, U.S.A. [1]. His fursona is a North American river otter, which is something he decided long before joining the furry fandom or his awareness of its existence. Back then, Alflor was (as he still is) in love with the Redwall series. As a result, Alflor had gained both his fascination with anthropomorphism and love for otters.

Alflor joined the furry fandom in spring 2010 [2], and he was a special guest at Califur 7. He has since published several furry novels and written several others which are available both on SoFurry and Fur Affinity. He has written a number of short stories as well. Three of them are available online, and one was printed in ROAR Vol. 4.

In his spare time, Alflor loves to ski, mountain bike and swim. He is an avid ukulele player and con attendee, attending both furry and non-furry conventions.

Since then, he has largely abandoned this fursona, and has more recently amassed a large Twitter following as a fursuiter named Ziggy.