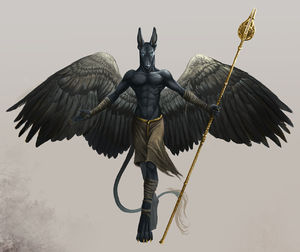 Art by Alector Fencer, from Character sheet for Duamutef.

Claudya S. (also known as AlectorFencer) is an freelance artist, born in Germany, who loves nature and travelling. She spends most of her time travelling around the world with her friends and drawing pictures of the places she has been. Seeing the world gives her most of her inspiration. Her style especially developed because of her alternative lifestyle.

Claudya completed the exams[clarify] for Graphic Design in 2006 amongst the best.

Claudya contributed to Rare 2010, and she drew the first volume of the comic Red Lantern with Rukis.

Alector was a guest of honour at ConFurgence 2015, where she was also inducted into the Furry Hall of Fame.[1]