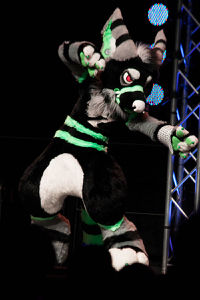 AlbinoTopaz, also known as AlbinoTayerr or just Tayerr (born April 26), is an artist, fursuiter, dancer, and fursuit maker who lives in Arizona, USA.[1]

AlbinoTopaz is best known for her character Tayerr, and her dancing routine at numerous furry conventions.[2]

She owns Zweitesich', a fursuit making business established in 2019.

All of her fursuits' names end with two "r"s, and have a Z' with a frowny face marking.

Tayerr 1.0 - The first version of AlbinoTopaz's Tayerr suits. This suit was made on an unknown date, but it was said to be made "5 years ago"[3] in 2012, so the date of 2007 can be inferred. The whereabouts of this fursuit and whether it was refurbished and sold or just retired is unknown.

Lamarr 1.0: Lamarr 1.0 was made at an unknown date but was first posted sometime in 2013.[10] He was officially retired and sold in 2019, where he was refurbished and sold to Raver Neonlight, who renamed him Zander.[11]

Lamarr 2.0: Lamarr 2.0 was made in October 2021.[12] He is the current version of Lamarr's suit and it is unknown whether he will be refurbished, retired, or remade any time soon.