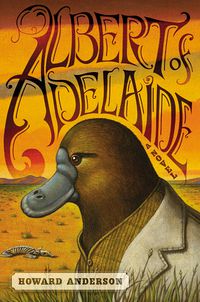 Cover of Albert of Adelaide

Albert of Adelaide is a novel by Howard L. Anderson, featuring a cast of anthropomorphic animals. It was first published on July 10, 2012, by Twelve.

The titular Albert is a platypus who has escaped from Adelaide Zoo. The animals there remember that Australia once belonged to them, and Albert heads north into the central Australian desert in search of a semi-mythological "Old Australia" where things have remained unchanged.

Albert instead finds a harsh environment filled with largely unfriendly inhabitants, but he is helped to survive by Jack (an itinerant pyromaniac wombat) and TJ (Terrance James Walcott, an ex-pat raccoon highwayman from San Francisco).