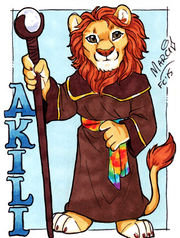 Akili does not maintain a social network presence, but regularly attends Further Confusion since 2001. Though Akili has an account on FlipSide as of 2015, his active role playing there ended thereabouts of 2005, due to changes in Nafse's real-life availability and subsequent resignation from roleplaying.

Akili is reachable on his personal muck server, which is open to the public.[3]

Akili's real parents were Matego and Saranya[5], both of whom made appearances during his life on TLKM. However, Akili disowned that father in favor of Gesten. He considers both Saranya and Jiona as mothers, although both are deceased in the Pridelands. As family lines included adoption, Akili has a wide range of family as a result of his adoption, the full details of which are available at Nalia's Family, an online site for the largest family tree on TLKM. [6] Eventually becoming King of the Life Valley Pride after Gesten, he fathered four cubs with Nafse. As of 2015, only one daughter, Azizi, is still active on TLKM.

Akili's roleplaying was primarily moved to Flipside MUCK on or around August 1, 2001 due to complications arising from changes in the MUCK's administration, although his character account remained active. Akili officially died in the Pridelands on January 24th, 2002 [7], and was toaded by request on TLKM on January 31, 2002.

An attempt to chronicle Akili's life on his personal page is still in progress at Akili's History, though that project may never be fully completed.