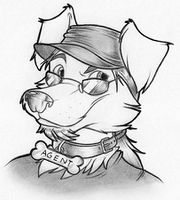 Agent, drawn by himself.

Agent (pronounced /agɛnt/) is a polish fur. He is a traditionnal artist, and since 2015, one of Gdakon's hosts and main English interpreter during animations for international audience.

Due to the polish language lacking the "j" sound, Agent's name is actually pronounced with a hard "g", but he doesn't mind his nickname being pronounced the same way as the english word "agent".

His fursona is a dog with tied blond long hair, and is almost always seen wearing a cap.

Since 2015, he is also one of the hosts of Gdakon, a north Polish furcon. He also serves as the main English translator during animations for international audiences.

Agent is active on Fur Affinity since 2009, and focuses traditionnal pencil art.