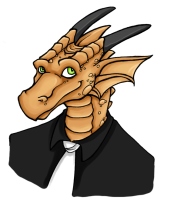 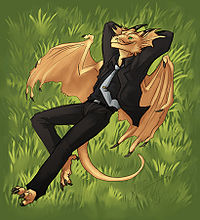 Acroth (born February 3rd, 1976)[1] is a furry artist and writer who lives in Longview, Texas, USA. He also enjoys commissioning and helping out other artists and his friends.

Acroth has attended Anthrocon in 2005, and Further Confusion in 2008 and in 2009. He has also attended Furry Fiesta, and is planning on attending this convention on a regular basis. He also enjoys making regular trips up to the Dallas Texas to various meets, as well as outings with friends and enjoys traveling around the US. As of June 2013 he has moved to Duncan, Oklahoma.

Acroth's fursona is an anthropomorphic bronze dragon with copper-bronze scales fading into a creamy tan. He has a smaller spade-like scale or horn between his other two horns. He is mostly depicted dressed in a suit and tie, and sporting a pair of shades reminiscent of his trade as a funeral director / embalmer.