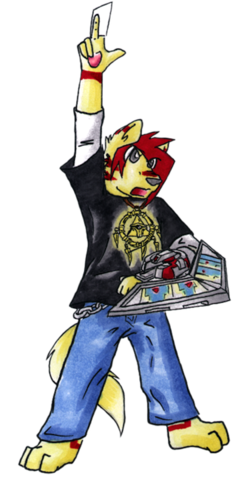 Achiga after watching YGOTAS for one month solid 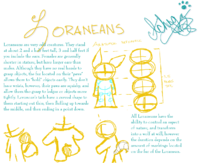 Achiga (real name Ricardo Casillas; born March 13, 1990 in Burbank, California, USA), is an artist who has been a member of furry fandom since January 2007.

Achiga's character is a bright yellow anthropomorphic Loranean wolf with medium-long, blood-red hair the same color as his markings located on most of his body. He attended Califur 5.

Achiga originally started as an anime artist. Eventually, he slowly started switching towards feral wolves and joined the furry community in January 2007, although his fursona wasn't created until June 2007. He still tends to draw anime work on the side, but most of his art focuses mainly on his fursona, Achiga, as well as his other original characters.

He has a girlfriend.

Achiga is of Loranean descent. Loranean is a species created by Achiga and so far the only characters that are Loranean are owned by him as far as he knows. Within the main storyline, Achiga can only morph into two forms: feral and Loranean. The anthro version of Achiga wasn't decided upon until sometime late 2008 early 2009, and the hairstyle wasn't officially decided upon until August 9, 2009. Although Achiga has an anthro form, he won't ever be able to use it in the storyline of "Achiga and Amaen."

"Achiga and Amaen" was undergoing its third revision around 2009. The first storyline was made up sometime within a few months from Achiga's creation, the second revision was restarted on September 12, 2008, and the third was being written in 2009, with no parts then available for public view.

Achiga is a role-player primarily on deviantART's furry message boards, or on MSN, usually beginning in anthro form.