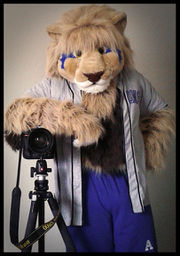 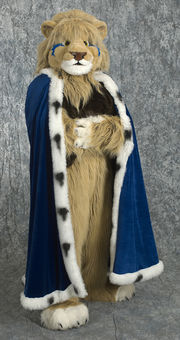 Abrahm (pronounced Ay-brum, also known as Space Lion; born July 7, 1976)[1] is a furry musician, photographer, and fursuiter, who lives in Ohio, U.S.A.[1] His fursona is a lion with blue fur beneath his eyes.

Abrahm's instrument of choice is the guitar, but he also plays the piano and drums, and can sing.[2]

The name, Abrahm, is a derivative of the name used for the M1 Abrams battle tank. However, Abrahm has no connection to Creighton Abrams or the United States Armed Forces.

Abrahm's first (and unofficial) journey into the furry internet communities began in 1996, when he discovered the Usenet newsgroup, alt.horror.werewolves. There, he learned more about therianthropy and the furry fandom, and posted under the name (and persona) of Abrahm Wolf.

Abrahm received his bachelor of science degree from Bowling Green State University in 1999. As of April, 2014, his occupation is systems analyst/engineer.

Abrahm has a wide variety of hobbies and interests. In addition to music composition/performance/arrangement and photography, he also enjoys playing football and basketball, weightlifting, and tinkering with computer hardware and software. He also enjoys watching animated films and television shows.

Abrahm also plays video games, but he does not play very often. His preferred games are 2D fighters (Street Fighter and King of Fighters games) and shooters (like Gradius).

Abrahm owns one fursuit of his lion character. It was designed with reference art commissioned from Moose BMD, and constructed by SPark. The suit debuted at Anthrocon 2009. A newer head, commissioned from Snap E. Tiger with ByCats4Cats.com, replaced the original in March 2010, and was debuted at Furry Connection North 2010.

When Abrahm is not fursuiting, he is usually roaming the convention space, with a Sony α7 camera. He enjoys taking photos of (and with) other fursuiters, and those photos are found at his photography website.