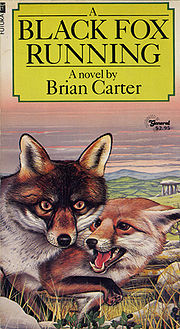 A Black Fox Running is about Wulfgar, a dark-furred Red Fox living in Dartmoor in Devon, England. Written from a fox's point of view, the story tells the tale of their fight for survival against a trapper called Scoble and his mad dog, the lurcher Jacko.