7chan initially languished as an image-board since day one of its inception in August 25th, 2005. This situation changed almost a year later, August 23rd, during "4chan's 2006 /b/ exodus" (or /b/day,) when 4chan moderators started to strictly enforce its previously neglected rules on posting illegal content, private forum/wiki raids (such as the ones on Wikifur), and posting personal information, which caused a reasonable amount of its users to flock to the present board, especially since raids were one of the many things 4chan was infamous for.

Even with this split, both boards' /b/ communities continue to share related memes, terminology, and image macros.

The image boards on 7chan are reasonably slower on 7chan compared to 4chan, yet a lot of the users prefere the slower pace, as popular threads don't get bumped off the boards as fast as on the much more active 4chan.

New to the 2ch community was the existence of an invasion (/i/) board, a section solely designated for site raids and vandalism, with Habbo Hotel, and any furry board/forum as their favorite, recurring targets. In June of 2007, 7chan's web host, Zenex 5ive (formerly PixelFX Solutions,) demanded the admins remove it, which they did.[citation needed] 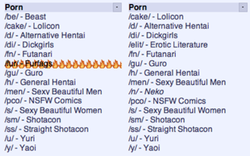 While there were quite a lot of invasions on both sides, the situation between /b/ and /fur/ had calmed down, and the most recent raids were done by 4chan /b/ users. This changed during the summer of 2007, when incursions sparked up again, as those from /b/ perma-ban anyone admitting to be a furry or even visiting /fur/.[citation needed] Sometimes 7chan moderators will decide to deface babyfur threads with music, shock images, etc.[citation needed]

By the end of the summer of 2007, and after a couple months of its name being changed to /furfags/, this board was deleted with no explanation, and replaced with the channel /neko/. Users were banned from posting furry material with the reason given as 'furfag'.

As it was back in 4chan, some members of this transplanted /b/ community continue, or attempt to, vandalize WikiFur.

On July 6th, 2007, a number of 7chan posters conspired to stage a public raid and protest at Anthrocon 2007. The gathering of protesters, consisting of a small number of 7chan's /b/ members (or /b/tards), with a turnout totalling exactly 4 people, 2 of which were carrying signs, one being of the Habbo's Hotel "Pool's Closed" meme, and the other being the often used anti-fur phrase "Y1FF IN HELL FURFAGS."

Two of the people present were dressed up as Habbo invaders, or "Nigras" (business suits with Afro wigs.) The Habbo impersonators not only confused furries as to why Habbo was related to a furry con, but also incited some racist looks from Pittsburgh's public eye.[citation needed] One raid member was seen on the premises registering for Anthrocon on 7.7.07, but was rather passive.[citation needed]