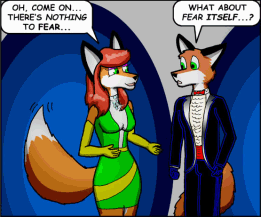 21st Century Fox: Romantic Comedy of the Future is a webcomic that debuted (in its current form) on February 14th, 1999. It currently updates on Monday.

The strip is written and drawn by Scott Kellogg, and follows the exploits of Jack Black, a fox, Cecil Stuart, a giraffe, and various other anthropomorphic animal characters in the high tech future world of 2066. Jack is a traveling engineer, roaming from one assignment to the next, repairing equipment for TLATech in his high powered 2066 Thunderbird.

The strip sometimes makes use of animated GIF files for special effects.

Jack and Cecil work for TLATech as field technicians, traveling all across the country on various assignments. Jack is a mechanical engineer, fixing hardware problems for customers. His prized possession is his 2066 Thunderbird. He is currently developing a relationship with Jenny.

Cecil is Jack's partner at TLATech. Cecil's specialty is software. Cecil is married to Barb and Beth

Barb and Beth are both programmers at Lockheed-Martin-Textron Skunkworks, where they work with Jenny. They are married to Cecil, and worked to get Jenny and Jack together.

This is a list of science and technology that is currently being researched and developed, or a theory, that can be seen in 21st Century Fox.

Buckytubes are tiny tubes of carbon atoms that are incredibly strong, as well as having special thermal and electrical properties.

Heads-Up-Display (or HUD) Glasses project a computer screen directly in front of the users eyes, over the field of vision.