★║FURRIES║★, is Google Plus' largest furry fandom based online community, focusing on the promotion of art, music and fursuiting. The community reached its peak member count of roughly 28,900 furries as of August 2018. Since June 22, 2016 the community has been completely open to join. On April 2, 2019 the community was shut down, along with the entirety of Google+, after Google discovered a large and undetected data breach in the site (which didn't actually do anything). In September of 2018, Google took the security breach as its long-awaited opportunity to "sunset" the site, which had been in decline for many years.

Graph of membership change over time 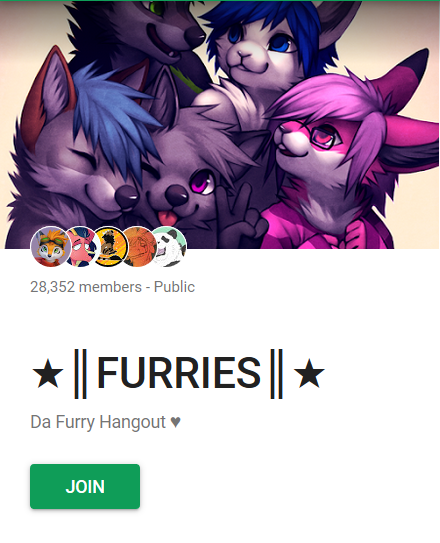 The community cover, as of January 2019

Moderators Serving (? = rough estimates due to holes in records): 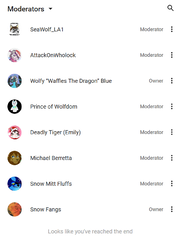 The community's history goes back to December 2012, when it was founded by Snow Fangs (formerly Smirk Tails), as the community -=New Furries=-, intended to focus as a place for never members of the furry fandom, as Snow Fangs had only begun to consider himself a furry earlier that year. When the community reached around 500 members, Snow Fangs decided to change the name to -=[*FURRIES*]=-, to appeal to a wider audience. During 2013 & 2014, Snow Fangs employed a few moderators to assist with running the community, which at that time consisted largely of approving/disapproving member join requests. The new moderators were mostly other Google+ members who had befriended Snow Fangs either in the community or via other platforms, with a notable addition being Thomas Galland, who remained active in the community until 2019, despite quitting his role as moderator in May of 2014. Most of the moderators appointed from 2013-2015 did not serve for long; however, the notable exceptions to this trend were Wolfy Blue, Snow Mitt Fluffs, and Deadly Tiger, all of whom served from early 2015 until the community's end in 2019 (Snow Mitts had to step down after leaving for bootcamp on January 7th, 2019). Wolfy Blue "Waffles The Dragon" was promoted to community co-owner in March 2015, after befriending Snow Fangs in mid-late 2014 as a fellow South Africa fur. Since then, Snow and Waffles have met up numerous times IRL, and continue their close friendship today.

Ban Tracker - Official community Ban Tracker, made public in November, 2016. The ban tracker gives information on all banned users (except some petty trolls and bots) including when they were banned, why they were banned, which moderator was on duty, explanations of the situation, and links to relevant posts. Older data (pre Nov. 23, 2016) does not include all of this information.